The duration of the TOEIC test is 45 minutes for the listening section and 75 minutes for the reading section, with 100 questions each with equal points, a total of 120 minutes/200 questions, with a total score of 990. It is not a typical format consisting of asking about simple facts, but more of types that ask about certain parts of the passage by creating slight confusion here and there. Therefore, it is necessary to practice enough to be able to finish the questions within the given time. 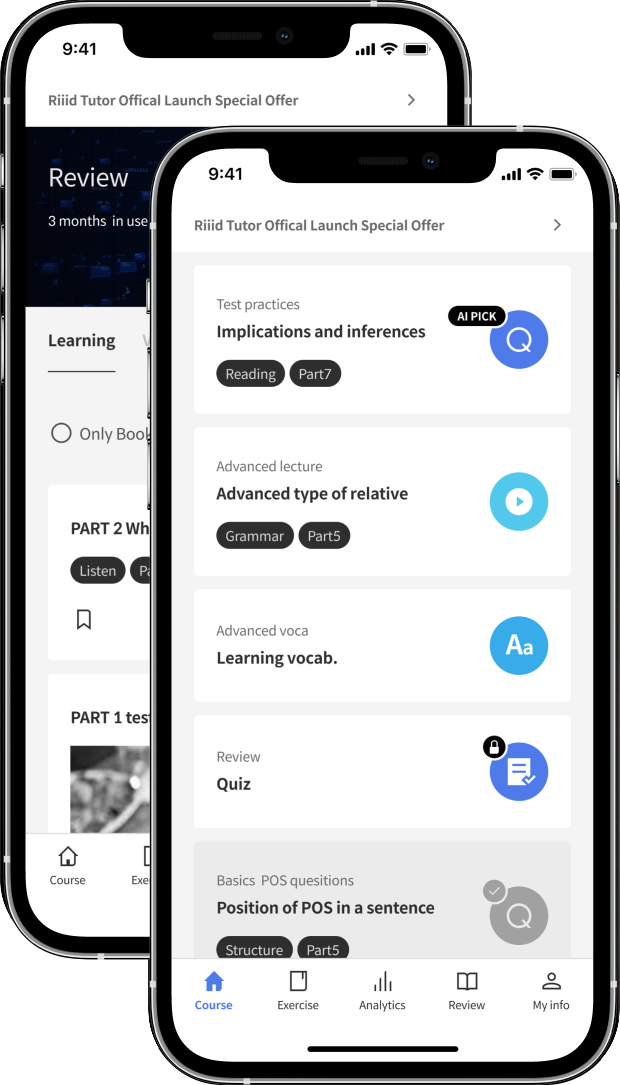 Riiid provides a free TOEIC online test for users who are new to or have experience taking the TOEIC test. The TOEIC free online test does not require a separate membership registration, but a membership registration is required to view the analyzed results. Riiid can predict your TOEIC test score through only a total of 12 test questions. The first 3 questions are basic questions to determine the approximate level of the test taker. Conversely, if you get at least one of the 3 basic questions right, the next 9 questions will be divided into practical questions. This is to set the interval to increase the accuracy of the score prediction.

The reliability of the prediction of your actual TOEIC score is 80-90% of ±100 points of the predicted score. However, each time you solve a problem, the accuracy increases even more. Riiid is getting a target score when setting up the initial test. It is being collected to show the user's journey to a goal score, and is intended to be used as a basis for guiding continuous learning. Just by conducting 12 free TOEIC tests, Riiid's TOEIC performance analysis results are analyzed in detail with 6 visual data and derived. It is divided into predicted scores, TOEIC skills, skills for each part, weak concepts, LC intonation analysis, and RC problem solving time. Through this, you will be able to know in detail your weaknesses that you previously knew piecemeal, so you can focus your efforts for the TOEIC test more efficiently. 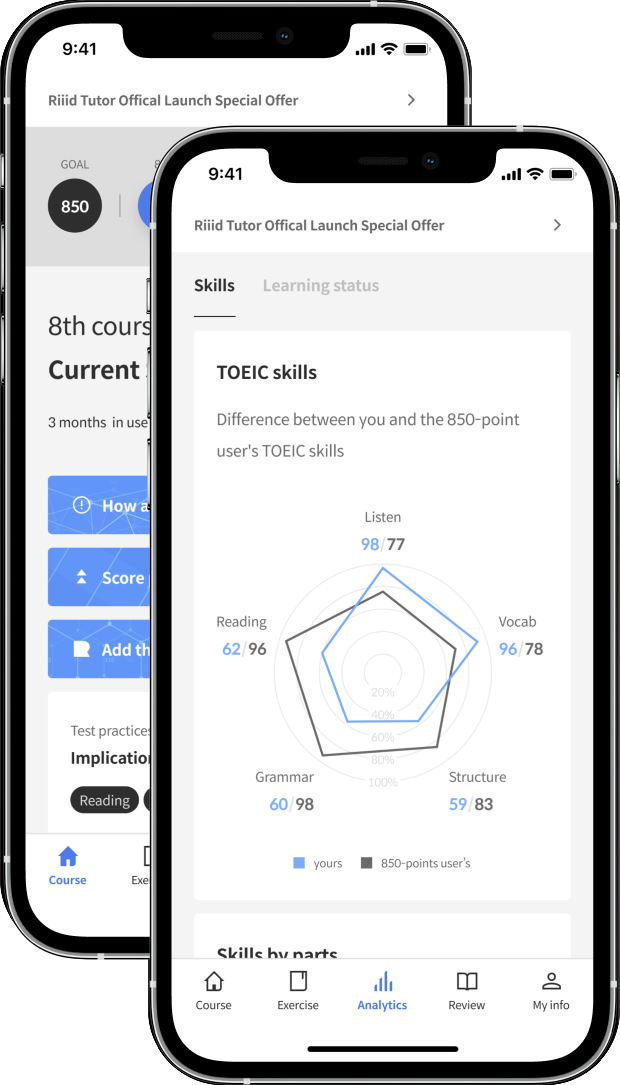 First of all, the predicted score in the TOEIC analysis result shows the difference between the user’s current score and target score. This can serve as a motivator that spurs you to work harder by objectively measuring your current ability even if you do not intend to take the actual exam at the moment. Second, TOEIC skills are divided into 5 parts: listening, vocabulary, structure, grammar, and reading comprehension. Third, the skill by part is separated by a total of 7 parts in the actual TOEIC test and shows in a bar graph which part is meeting the goal and which part is relatively weak. Fourth, weakness analysis shows which part of the test concepts is relatively weak. Fifth, in LC intonation analysis, intonation is largely divided into British, American, and Australian, and again divided into male and female, and tells you about your weakest area in listening comprehension. Finally, in RC's problem-solving time analysis, we visually analyze the difference between the recommended span of time and time spent in solving Part 5, 6, and 7.

What our customers are saying. Find the reason why people choose Santa.

"It was so nice to be able to study during breaks, commuting, and even lying down at home! When I had time, I solved Part 5 problems on the app, and my RC score went up a lot." 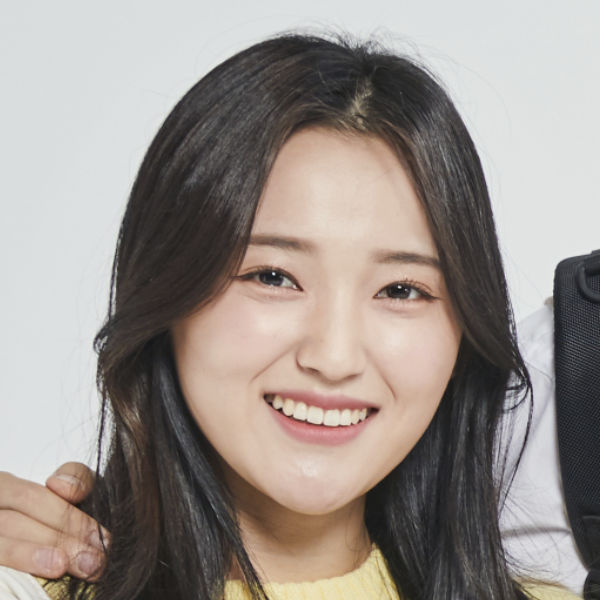 Transfer Student
"To be honest, spending money on TOEIC was a waste. I solved a lot of questions through the app for about a week, so I got a higher score on the TOEIC test, which I had neglected for two to three years." 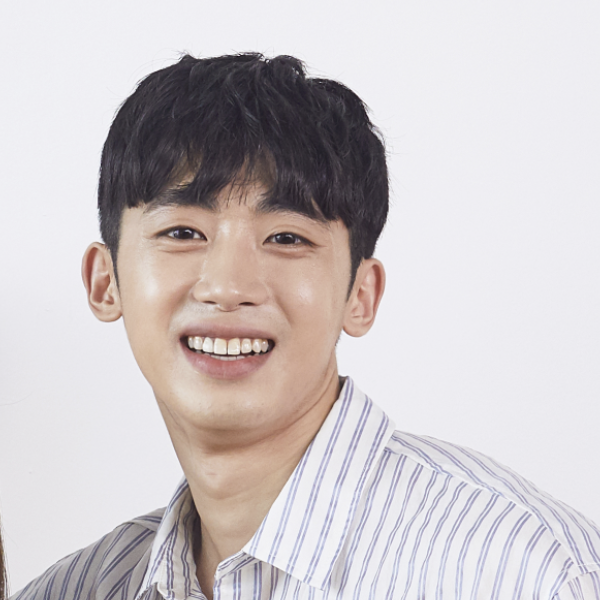 Graduating student
“After 5 days of experience, if you solve a lot of problems, it will be similar to the actual TOEIC score. The problem keeps on throwing me weak parts, so I get cringed and work hard.” 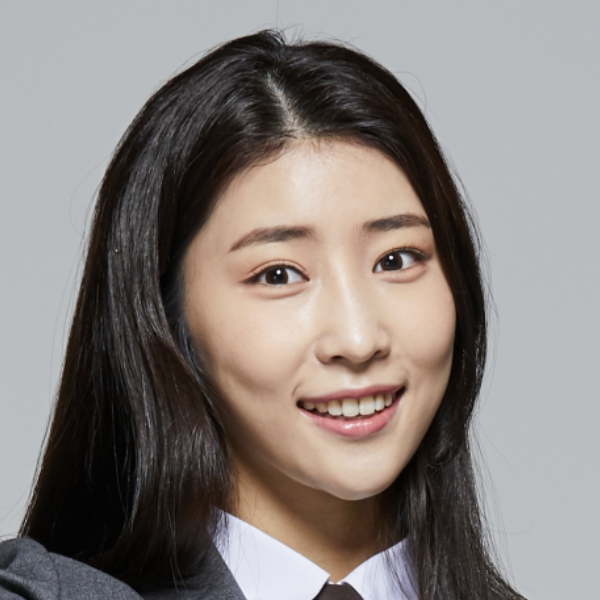 Ready to take your TOEIC Score to the next level?